The region of the Middle East thrives in the controversies of its surrounding countries. Admittedly, its reputation has been misconstrued due to political, social, and economic past but after having gone to the United Arab Emirates (UAE) such a perception shifted; perhaps, even given it hope.  In fact, two of the seven Emirates, Dubai and Abu Dhabi, were, insofar, comparably similar to Singapore’s urban structure and lifestyle. Highways and roads; transportation systems; public spaces; and institutional buildings— of offices and shopping malls— only displayed architectural genius and modernized economies. Despite this, both Emirates remained culturally and religiously superfluous as reflected in their Mosques and Emirati citizens walking with their abayas and hijab (for the women); kanduras and ghutrahs (for the men).

Atop the 125th floor of the Burj Khalifa, a realization sprang forth—Dubai is actually built on a desert, with infrastructure and roads constructed around cream colored sand and deep blue (almost grey) waters from the bird’s eye view. Its magnificence isn’t merely because of how it was built but what it had to offer to the tourist and local: a sight that narrated the beginning and development of a nation. 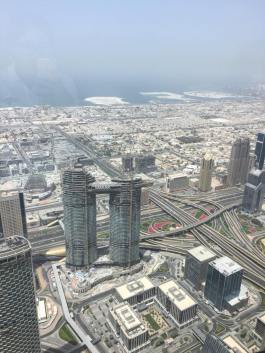 Another ingenious creation, the Dubai Miracle Garden, where flora and fauna were curated and carved into various sculptures, is an art in itself. Like a magical garden that it is, ice cream like mountains filled with pink and purple flowers and swan and heart figurines (to name a few) achieved in unfathomable heights were presented. What’s impressive is that every year, the designs are changed, leaving tourists surprised with new garden installations. 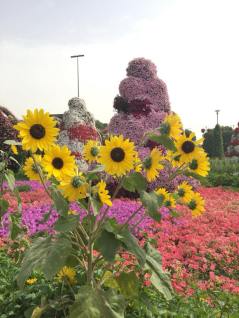 Seeing that side of the city, a visit to the desert safari is not to be missed for the ultimate Arabian experience. Through sand dunes and camel rides, one will feel the heat as it strikes and seeps into skins, leaving one sweaty and parched. Also, catching the sun set amidst a desert view is spectacular. Supper composed of hummus and chick peas with curry concoctions accompanied by sufi whirling and belly dancing performances and henna tattoos, capping off the Arabian night. 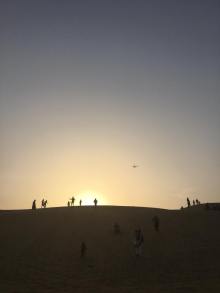 Sunset by the dunes.

Just two hours away from Dubai, the capital, Abu Dhabi, is separated by a bridge and signage–the sole indicators that one has crossed the border.

Along the way, the Sheik Grand Mosque’s blinding white boulders is an eye catcher. If there are things to remember: modesty and respect are values that shouldn’t be ignored. Simply following the dress code is essential for one to be able to enter the vicinity where the white marbled beauty lay. Whilst inside the mosque, it was a sight for sore eyes: intricately designed and elaborately detailed from pavement to ceiling. Clearly, this was a labor of love, a love for Islam.

Recreational automobile fun can be experienced in the extreme rides that run at a speed of a Ferrari car in Ferrari World. Enthusiast racers will take pleasure in learning and practicing in the Karting Academy; apart from this, other activities entailed learning how to change tires under time pressure(!). In between the hustle and adrenaline, coffee and snacks are available at the café.  Ferrari and racer dreams will definitely be fulfilled in this theme park.

Also in Abu Dhabi is the Founder’s Memorial. Because the Emirati highly regard the contributions of the late Zayed, this was built in his honor which contained leveled light installations forming the face of the founder. 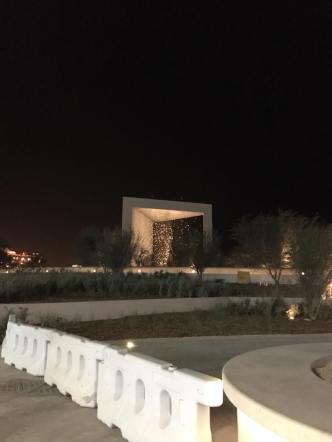 All these innovations exceeded expectations of what is in the Middle East.  Dazzled by this booming country, it can be said that: a diamond in the rough, as the Aladdin song suggests, fittingly describes the United Arab Emirates.

View all posts by yourtwirista